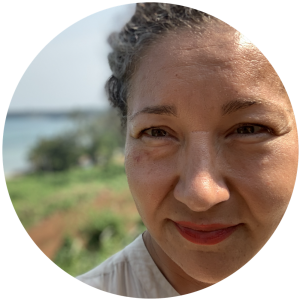 Nevin Tuna Erönde (b. 1974) graduated from the University of Salford, B(Sc) Music, Acoustics & Recording in 2003. Composer and sound artist. Her work is based on experiences from her own life, from which she thematizes gender, ethnicity, cultural and societal structures. Worked as a sound designer in the computer games industry from 2006 – 2016. Latest compositions from 2013 to the present include:

female prayers – The Sacred and The Secular (2017 – present) A peaceful message about diversity in public spaces. Female Prayers is her debut as an audiovisual installation artist. The performative installation breaks down hierarchies and disrupts the audience with elements of performance, storytelling, and musical urban soundscapes from Friday Prayers led by women around the world.

SOIL (2016) Not released. Music for an art movie about death; the phenomenon of animals seeking into nature when dying.

Daydream. Sit with a cup of tea. Stare at clouds in the blue sky. Listening. Breathe in doing nothing. Breathe out doing even less. I like to disrupt people’s beliefs in a loving way. Ever since I was a little girl, I had a fascination with the analog FM and AM sound waves that emerged from my father’s radio. I loved climbing trees in the garden. Imagining myself as the captain of my own ship, traveling to distant shores, and exploring the seven seas. I also loved writing stories. Stories with magical twists and turns that would surprise the reader. Their beliefs turning upside down and making them hold their breath in wonder.

There are so many things in life that we take for granted, because of tradition, habits, or simply because that is how things always have been. We don’t see the water that we swim in. I take themes from my own life experiences and thematize intersectionality, using sound art as a medium to focus on the hidden cultural and societal structures that surround us. Challenging existing belief systems and surprising the audience in loving ways. My work is driven by is a deep urge to challenge and explore the magic and wounds in the intersections of gender, ethnicity, cultural and social constructions.